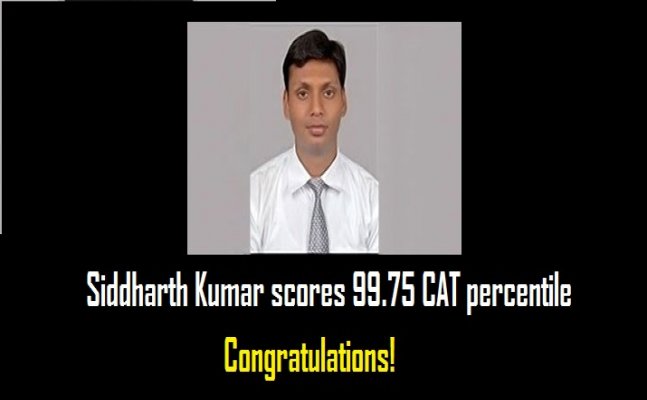 The results of the Common Admission Test (CAT) 2017 have been announced and Siddharth Kumar, hailing from Patna has scored 99.75 percentile in CAT 2017. Know his success story.

The results of the Common Admission Test (CAT) 2017 have been announced and Siddharth Kumar, hailing from Patna has scored 99.75 percentile in CAT 2017.

While talking with India Today Education, Siddharth Kumar told, "This is not the first time that I appeared for CAT. In 2016 I gave my first attempt and scored 94 percentile."

Take a look at his CAT percentile in detail-

Shockingly, Kumar told that he left his job in the Automobile industry for the prepration of CAT. "I left my job and dedicatedly studied for CAT," he added.

Additionally, talking about his score, Kumar said, "Well, I expected to score more marks. I appeared for the slot 2 exam, which was comparatively easier. That`s why I scored a little higher."

Sharing the preparation strategy, Kumar said, "As I was appearing for CAT 2016, I had an idea for the exam. And I believe that one should give more mock tests and do the detailed analysis of it in order to understand CAT more."

Furthermore, Kumar told that he did more of self-study. "I did not take full time coaching and whenever I had doubts I just asked my tutor."

Kumar said, "I would advise students not to get panic, keep calm and work hard."