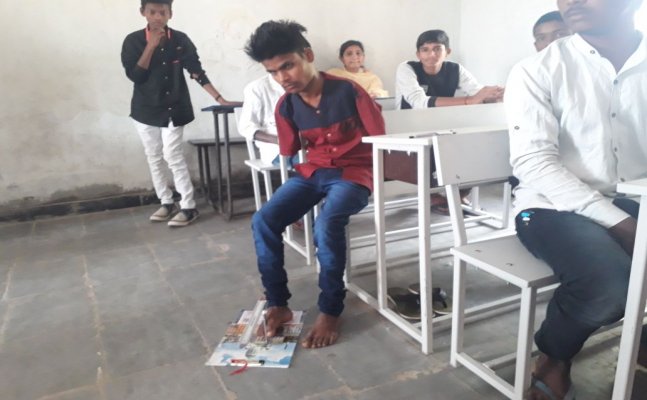 Rise above all odds is what Elluri Shankar, a student of class 10th from Mancherial district in Telangana exemplifies.

Rise above all odds is what Elluri Shankar, a student of class 10th from Mancherial district in Telangana exemplifies. He wrote the answers for class 10 board exam using his feet.

The young boy lost his hands in an accident in 6th standard, but the deformity didn’t stop him from writing the exam. The headmaster of Nennel High School, says that Shankar lost both his hands to an electric shock while he was playing with his friends at an under construction site in class 6. She told leading daily that, "The fatal accident did not prove to be a restriction for him. He learnt to write with his leg soon after his accident and never opted for a writer since then”.

The student, hailing from Nennel Mandal in Adilabad district wrote his first language paper sitting on a bench. Shankar’s problem didn’t end there, he lost his father at an early age and due to difficult circumstances, his mother was forced by to work as a labourer. "There was a difficult phase when the student wanted to quit education to support his family by opting for some domestic work. Though, we encouraged him to pursue further studies to support his family in a better way".

With untiring spirit, Shankar aims to be independent in life and attain some good skills after scoring goods marks in the SSC exams. "He is brighter in academics than his classmates and has a resilience to learn. He doesn`t want to be dependent on anyone".