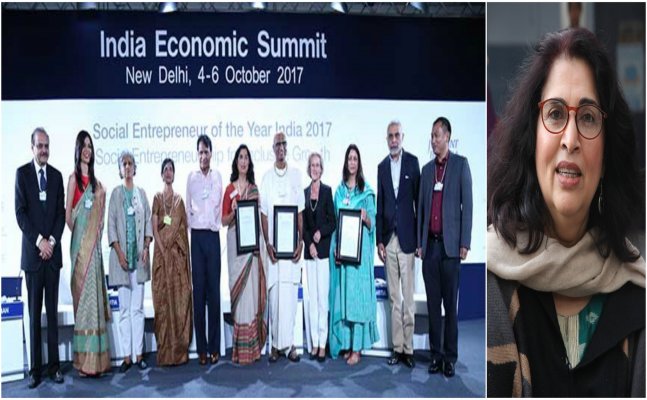 There are two kinds of people, one who talks of development, equality and feminism. The other group is, who work in the fields stated. One such woman of substance who not only stood up for the education of disadvantaged girls of the society but made sure that they could retain themselves in school by providing employment cadre for their mothers as well.

Urvashi Sahni, founder and chief executive of Study Hall Educational Foundation (SHEF), received the Social Entrepreneur of the Year award 2017 for her remarkable work in educating India’s most disadvantaged girls.

There are two kinds of people, one who talks of development, equality and feminism. The other group is, who work in the fields stated. One such woman of substance who not only stood up for the education of disadvantaged girls of the society but made sure that they could retain themselves in school by providing employment cadre for their mothers as well.

Urvashi Sahni, founder and chief executive of Study Hall Educational Foundation (SHEF), received the Social Entrepreneur of the Year award 2017 for her remarkable work in educating India’s most disadvantaged girls. She made her way to the prestigious award leaving behind candidates from very prominent non-profit organizations.  The other two finalists for the award were Safeena Husain of Educate Girls and Madhu Pandit Dasa of the Akshaya Patra Foundation.

The award was presented by Minister of Commerce and Industry Government of India, Suresh Prabhakar Prabhu, in the presence of over 300 participants at a sophisticated gathering in New Delhi.

Suresh Prabhu said- "Social Entrepreneurs deal with different aspects and challenges that exist in the society. They are bringing technology with their commitment and passion to transform lives of many people. I firmly believe that changing lives is far more important than anything else and hence to have a happier society we need many more social entrepreneurs like we have seen today".

Sahni was chosen from over 100 applicants. SHEF has established a trade model of education for enclosure, empowerment and leadership building for India’s most disadvantaged and girls at risk. It has raised its model across 993 government schools of Uttar Pradesh and Rajasthan, providing training to 24,000 teachers while impacting lives of 501,000 girls in the hotbeds of paucity and gender discrimination.

Not only this, Sahni ensured that the women from ultra poor communities do not lose out resources to keep their daughters in schools and thus started Didi, a catering and tailoring business enterprise that has took in loop Lucknow’s market for corporate meals and has made the income of their women employees double.

Accepting the award, Urvashi stated that the perfect tool for changing mindset is education. “Education should be broader, deeper and wider. Until then we cannot call ourselves a fully democratic country”.

Sahni is an Ashoka Fellow, an honorary member of the Clinton Global Initiative and a non-resident fellow at the Centre for Universal Education at the Brookings Institution in the US.

Sahni told in her girls education programme, the organization make use of the government curriculum but ensures that it is mingled with grave feminist pedagogy or gender-empowering methods of education. “We have also added a separate programme called ‘critical dialogues’ in the official curriculum,”.

Imploring the challenges she said, the major challenge to remain sustainable is building teams that trust in the idea, the mission, the underlying philosophy, the culture of the enterprise and above all a culture of entrepreneurship. “Having a secure flow of funding is important too, but in my opinion if the social entrepreneur has invested enough in building a strong team, they will ensure the flow of funding. I work very hard at building my team in the ways described above. We are a learning organisation and that is what sustains us”.

Extending congratulatory wishes to the winner, Shyam S Bhartia, Chairman and Founder and Hari S Bhartia, Co-Chairman and Founder, Jubilant Bhartia Group and Founder Directors of Jubilant Bhartia Foundation, said, "We feel inspired by the passion of all the three finalists. High technology can brighten potential of India`s social entrepreneurs and this has been proved by this year`s finalists by their use of modern technology in implementing change. The last eight years of organising the SEOY India Award has been an insightful and enriching experience for us".

He further added, "Even for the winners, the SEOY India platform has offered several opportunities to network, identify new avenues for funding and enhancement in their learning curve.  We are glad to see that the platform of SEOY India Award has evolved to become one of the most distinguished honors for social entrepreneurs in our country".

The SEOY (Social Entrepreneur of the Year) Awards have made their presence in India for 13 years now.  Social entrepreneurs are the change agents who take in hand the needs of undeserved communities in both scalable and sustainable ways.