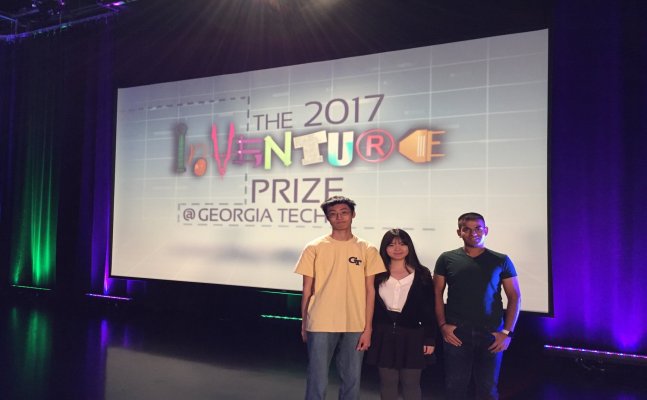 Bengaluru boy made his mark at US inventors` competition

Bengaluru boy Sarthak Srinivas was amongst the limited who are jammed in the fancy of tens of visitors at the Collegiate Inventors Competition awards in the US. He is a computer science student at Atlanta`s Georgia Institute of Technology. Sarthak grew up in Indiranagar and Kasturinagar, where his parents still live.

The annual competition, Collegiate Inventors Competition awards which promotes novelty, entrepreneurship and originality among college students in the US, was held at Alexandria (Virginia). The competition saw six Indian or Indian-origin students displaying their innovations - from the augmented reality platform for locating products in warehouses to water purification technology to a nose device that aids breathing.

Bengaluru boy Sarthak Srinivas was amongst the limited who are jammed in the fancy of tens of visitors at the Collegiate Inventors Competition awards in the US. He is a computer science student at Atlanta`s Georgia Institute of Technology. Sarthak grew up in Indiranagar and Kasturinagar, where his parents still live.

Sarthak, who is currently studying in his fourth year, has made an augmented reality platform Oculogx along with Charu Thomas, a third-year industrial engineering student at Georgia Institute of Technology.

Sarthak said, "Oculogx helps find and pick products or orders at large warehouses by using Microsoft`s HoloLens and Google Glass. There are 7,50,000 warehouses across the world, of which many are huge, that`s why our technology is extremely relevant".

Clarifying how tracing products in large warehouses could be problematic and time-consuming, Sarthak said Oculogx would be the accurate tool for it. His invention could be utilized for three purposes - barcode scanning, indoor navigation to a particular product and highlighting individual shelves in warehouses.

he said "As of now, the technology is targeted at warehouses and making their operations simple, but it can also be used for large retail stores at a later stage".

Charu joined forces with Sarthak on the invention after she saw they had similar interests. "We won $1,00,000 for our innovation at the Atlanta Startup Battle earlier this year. We intend to use the money to take our project to another level," said Charu. She was born in Australia and has been living in the US since she was two when her parents moved there.

Pooja and her co-inventors won silver in the category of undergraduate for a device that can be worn in the nose and helps in breathing by expanding the nasal passages, Ashwinraj grabbed bronze for Phoenix-Aid, a five-layer bandage that accelerates healing of chronic wounds, particularly in diabetes patients. Archana co-invented a water purification tool for the oil and gas industry.

In the category of postgraduate, Praveen Kumar Reddy entitled himself a bronze for his innovation that supports structures (like bridges) by firming up joints and permitting them to take more load.