The Indian Colt is drawn in Group A and will begin their World Cup journey on October 6 when they take on the United States, followed by Colombia and Ghana on 9th October and 12th October respectively at the Jawaharlal Nehru Stadium in New Delhi.  Amarjit Singh Kiyam will lead the team after squad members unanimously voted him to be their captain.

The Indian team for the upcoming Under 17 World Cup is a fascinating blend of teenagers from a different part of the country. The boys come from different walks of life, a majority of them have faced adversities, some fought difficult battles but all of them have stayed away from home to participate in India’s first ever FIFA World Cup. 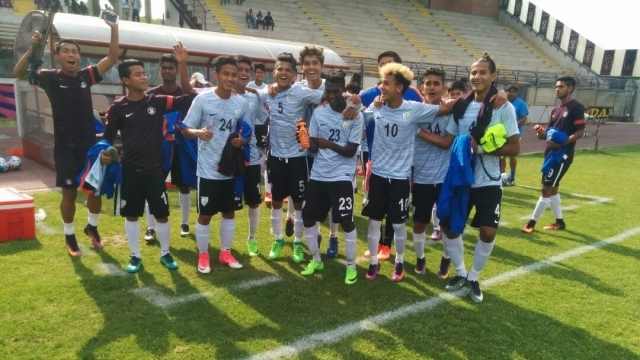 The Indian Colt is drawn in Group A and will begin their World Cup journey on October 6 when they take on the United States, followed by Colombia and Ghana on 9th October and 12th October respectively at the Jawaharlal Nehru Stadium in New Delhi.  Amarjit Singh Kiyam will lead the team after squad members unanimously voted him to be their captain.

The young guns had a gruelling preparation, travelling across the globe to gain exposure and now it’s time make use of it and step up on the big stage.

The skipper hails from a small town in Manipur whose father is a farmer and mother, a fish vendor took up football at the age of five and later joined Chandigarh Football Academy in 2010 where he caught the eye of national selectors. The 16-year-old is a natural leader with a sound head on his shoulder and guides the team from the midfield.

The skilful attacking midfielder from Sikkim is one of the key players in the team, his ability to pick passes and blow past players will prove vital in the tournament. The 17-year-old did not have the means to buy a football as his parents couldn’t afford but they always supported and encouraged him, eventually through his hard work he was picked to represent the country on the grand stage.

The Bangalore lad regarded as a set-piece, dead-ball specialist and a live wire on the field is a product of Chandigarh Football Academy at a young age and remained there for seven years before shifting to the national camp at the AIFF Academy in Goa.

Jeakson Singh comes from a family of a sportsperson, took up football at a young age, accompanying his father to the village’s club. Jeakson also is a product of Chandigarh Football Acadamy, worked relentlessly and trained until he found a place in the India U-17 squad.

Suresh Singh Wangjam is one of the most capped players in the team. He led the side in the AFC U-16 Championships and BRICS Cup in 2016. The midfielder from Imphal has also represented Manipur in the national U-14 championship in 2011 and later was called for a trial in Goa by the national selectors for the World Cup.

The product of the Minerva Punjab FC played for his club side that beat the national team 1-0. Initially, he was not part of the team but only to be included as late as April 2017. Ironically, the young lad was always interested in cricket but his father encouraged him to take up football.

Son of a van-rickshaw driver and seasonally as a tailor, the midfielder from West Bengal chose to take up football at a young age as his parents encouraged him football but at the same time wanted him to balance it with his studies. Abhijit had a couple of decent game in the 2017 European exposure tour, scoring against Italy XI and netting thrice against Valmontone City in the group stage of the Lazio Cup.

The tall and lanky goalkeeper loved playing football but never thought of playing for the national team or participates in the FIFA World Cup but while playing for the local Bisnupur district, Singh was picked to play for Manipur’s junior team and since then he been around the national team. Dheeraj brings a bag of experience with him as he part of the 2013 SAFF-U 16 tournament and the AFC U-16 championship.

For a defender whose stamina seems never-ending and whose agility often leaves opposition bewildered, Boris Singh often runs out of words when he describes his journey. It is almost unfathomable to see a kid who started playing football with a tennis ball become an integral element of the Indian U-17 World Cup Squad. Almost cinematic, some might say, but that is what Boris Singh’s life has been.

The boy from Maharashtra is the first choice striker and is India’s prominent hope for getting goals. The poacher has a strong physical presence and can play with both feet. The 17-year-old was among the 10 players who were picked by former Germany and Bayern Munich legend Paul Breitner to represent India at the FC Bayern Munich Youth Cup in 2010.

The 17-year-old has been part of the national team for past three years and is a self-taught footballer. He hails from the land of Indian football legend IM Vijayan, Rahul dreamt of emulating his hero from childhood.

The remaining players in the squad are: