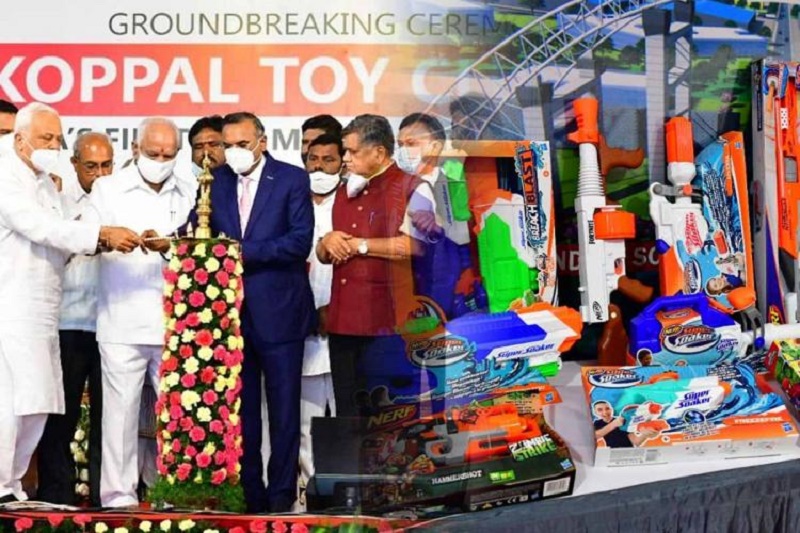 Karnataka Chief Minister BS Yediyurappa on Saturday laid the foundation stone for the country’s first ‘toy manufacturing cluster` in Koppal district’s Bhanapur village where 400 acres of land has been allocated to establish plug-and-play manufacturing units at a cost of $545 million. The manufacturing campus is being promoted by Aequs SEZ Pvt Ltd in partnership with the Karnataka government.

Karnataka Chief Minister BS Yediyurappa on Saturday laid the foundation stone for the country’s first ‘toy manufacturing cluster` in Koppal district’s Bhanapur village where 400 acres of land has been allocated to establish plug-and-play manufacturing units at a cost of $545 million. The manufacturing campus is being promoted by Aequs SEZ Pvt Ltd in partnership with the Karnataka government.

The toy manufacturing cluster will contain over 100 units with the potential to generate 25,000 to 30,000 direct jobs and over 1 lakh jobs indirectly, Chief Minister Yediyurappa said.

The state government signed memorandums of understanding (MoUs) with six companies on Saturday which will drive an initial investment of over $200 million.

Large Scale Industries Minister Jagadish Shettar said that the cluster is expected to drive investment of over $450 million in the next five years.

The campus of the manufacturing units has been designed to include a Special Economic Zone, Domestic Tariff Area and Free Trade Warehousing Zone. The capabilities will include modal making and tooling, moulding, assembly, painting, packaging, testing and warehouse management. The cluster will have plug-and-play industrial buildings along with the option to customise the industrial facilities.

“This is a momentous occasion as the Koppal toy cluster is the first in the country. By December this year, the construction of the campus is expected to be completed. If this happens, we will invite Prime Minister Modi to inaugurate the completed toy cluster,” Yediyurappa said. Yediyurappa said that preference would be given to women for employment in the manufacturing cluster in Koppal. “Women who are earning Rs 200 per day now will be able to earn Rs 600 per day. We will prioritise employment of women and Aequs has promised to train the locals in skill development,” he added.

Regarding apprehension among locals that the promised jobs would be given to those outside the district, Industries Minister Jagadish Shettar said that 80% of the jobs would be given to locals from Koppal and other parts of the state. “We are implementing the Sarojini Maharshi report which calls for employment of locals. We will give companies a margin of 10-20% of their workforce to be hired from outside the state. These will be the high level skilled jobs. First preference will be given to residents of Koppal,” Jagadish Shettar said.

Prior to the BJP coming to power, the toy manufacturing cluster was to come up in Ramanagara district. However, Koppal was chosen in 2018 by former Industries Minister and Congress MLA RV Deshpande as it is 380km away from Bengaluru, 400 km away from Hyderabad, 95 km from Hubballi and 215 km from Belagavi, all of which have airports. Koppal has a well-connected railway network and is strategically closer to Mumbai, Goa, Mangaluru, Visakhapatnam, Chennai and Thoothukudi, which have major ports.

Jagadish Shettar further stated that a pharma park would come up in Yadgir district’s Kadachur, where manufacturing units will be set up across 4,000 acres of land. A total allocation of Rs 2,812 crore has been sanctioned for the same, Jagadish Shettar said. The pharma cluster is expected to generate 11,770 jobs. The Minister also said that the State High Level Clearance Committee has given the go-ahead for the construction of a consumer electronics manufacturing cluster too, in Hubballi.