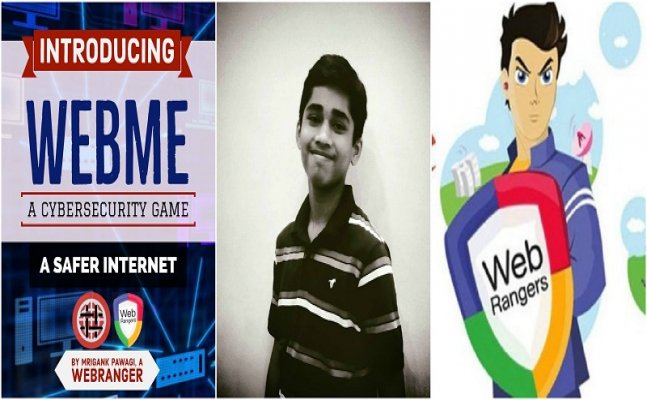 At a mere age of 14 when students are struggling with their homework, and buzzing the internet, this Noida boy, Mrigank Pawagi, stands apart. The young boy has developed an android app that teaches internet safety to netizens.

At a mere age of 14 when students are struggling with their homework, and buzzing the internet, this Noida boy, Mrigank Pawagi, stands apart. For him, the internet is not only a fun learning platform but a platform which needs where safety at its priority. The young boy has developed an android app that teaches internet safety to netizens.

His app ‘Webme’ was announced as one of the winners of the third edition of the Google Web Rangers contest by Google India.

Launched in 2015 Web Rangers is an annual programme of Google that aims to encourage teenagers to come up with innovative ideas and campaigns to promote the importance of internet safety.

Pawagi is a student of class 8 of Vishwa Bharati School in Sector 28, made this app in 2017 after he got an idea to teach internet users about net safety through video games.

The third edition of the Web Rangers contest received over 5,000 projects, campaigns and posters from across the country and Pawagi was declared as one of the three winners. The winners were given a tablet and a certificate of appreciation from Google India.

Pawagi’s app is a fun interactive game which allow users to learn internet safety by completing interesting challenges that take them to different levels.

Pawagi said “I read blogs and articles on the internet all the time and I realised that there are a total of 3.2 billion internet users in the world and almost 50% of them prefer playing video games on their phone. There are many articles and blogs related to internet safety but reading text is a boring exercise and people may lose interest soon. So, I decided to develop a video game that can simultaneously entertain people and teach them about internet safety”.

Further explaining the working of his app, Pawagi said, “This game has a total of five levels and after a player has crossed all levels, they will receive a certificate of appreciation for learning internet safety. The first level will teach the user how to connect the phone to a WiFi network and to identify which network is safe and which is vulnerable.”

“People love to use the internet but they are hardly bothered about safety. It is a minefield of information but one needs to vigilant to save themselves from malicious websites,” Pawagi said.

“I am always on the internet researching something or the other and I want to pursue computer science in future. It took me four to five weeks to develop this application and, currently, it is available on android powered phones and tablets. I am also working on developing higher levels for the game and a cross platform version will also be developed,” Pawagi said.

Google India representatives remarked that the Web Rangers programme has trained over 30,000 student ambassadors across private and government schools from over 75 cities in 12 states.

Sunita Mohanty, director, trust and safety, Google India, said,“We are overwhelmed by the participation of students in third edition of the Web Rangers contest. This year has been our most successful edition as we saw equal participation of students from private and government schools. With their creative ideas, teenagers helped us spread the message of internet safety and good digital citizenship, while empowering their friends and families to have a safer and meaningful digital experience”.