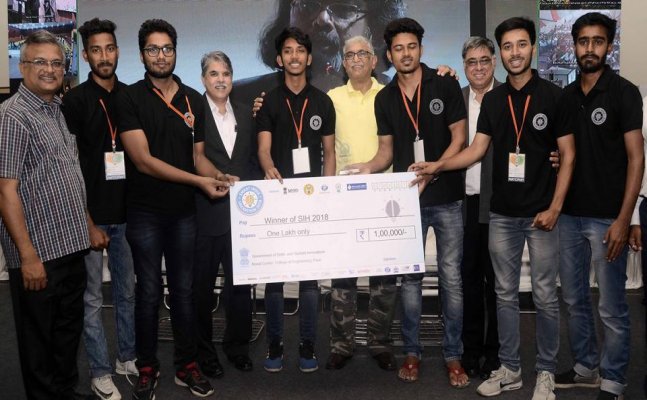 Six students ofthe Oriental Institute of Science and Technology, Bhopal, were awarded Rs 1 lakh for the project at College of Engineering, Pune

Smart India Hackathon 2018 that showcased young talents bringing innovative technolgical solutions for several issues flagged by 27 ministries has awarded a project by Team Logic view which would reduce the use of paper in the Indian Railways and digitise the entire ticketing process with the first prize.

The application developed will help ticket collectors (TC), whereby a simple QR code already present in the railway tickets will enable the TC to track and record the tickets. This is also solve the issue of black-ticketing in Indian Railways and TCs selling away pee-booked tickets.

Six students ofthe Oriental Institute of Science and Technology, Bhopal, were awarded Rs 1 lakh for the project at College of Engineering, Pune (COEP).

In total, 46 teams had competed under the Student Innovation category, with six coming out victorious.

Another team, Kryptonite6, who had worked on creating an application to minimise food wastage, won the first consolation prize.

This year, more than17,000 teams participated for two editions (software and hardware), with 12,047 teams for the software edition alone.

41 teams from different parts of India consisting of 246 students competed in the grand finale for the 14 problem statements posed by MoHUA and the State Governments. Addressing the participants at the event, Sh Hardeep Puri, Union Minister of State for Housing and Urban Affairs(I/C) informed that a total of 340 Problem Statements have been proposed across the Ministries/Departments/ States etc. and 1282 teams comprising more than 10,000 young Engineering students and their mentors participated in the event.

Ministry of Housing and Urban Affairs participated as a host of Chennai Nodal Centre which is a combined initiative involving the Ministry of Human Resources Development, All India Council of Technical Education (AICTE), Inter-Institutional Inclusive Innovations(i4c) and Persistent Systems Ltd.

Providing details of the participation of Ministry of Housing and Urban Affairs, the Minister informed that from his Ministry, out of several problem statements sent to the Smart India Hackathon Team, the following seven software problems are found hackathonable: