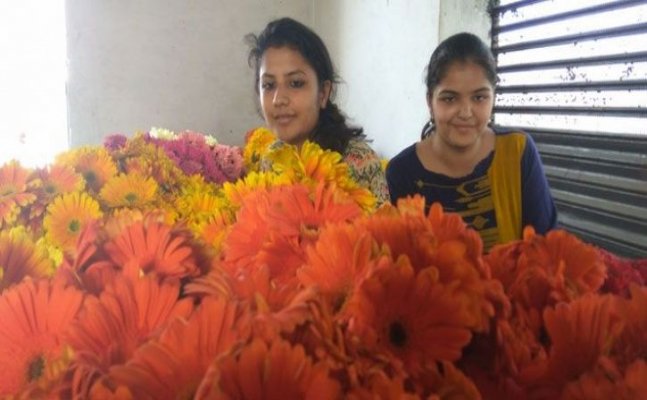 Two young women with professional college degrees opted to become successful flower farmers and flower traders with the goal to occupy overseas markets. In the process, they have encouraged several traditional farmers in Haryana to switch to growing flowers.

Two young women with professional college degrees opted to become successful flower farmers and flower traders with the goal to occupy overseas markets. In the process, they have encouraged several traditional farmers in Haryana to switch to growing flowers.

Shivani is 23 and an MBA qualified while Vamika is 25 and a Chartered Accountant. Not that their professional qualifications are not coming into use. The two are successfully operating their business – Unistar Agro – as they would have in any other organized business with their combined knowledge of business administration and accountancy to advantage.

Overwhelmed by their success, the Haryana government has honoured them with an award, and extended incentives including subsidies.

Shivani took the first step. While out on a drive on the Rohtak-Delhi national highway, she spotted big blown-up green nets installed on green fields on both sides of the highway.

Struck by the strange sight, she clicked pictures of them and once home, took to Google. Her interest was kindled after reading through several links on polyhouse (the blown up house-like nets) farming.

She found that many people were polyhouse farmers. What’s more, the Haryana government was generous with subsidies.

Then, Shivani met Vamika Bahety, who had a factory in Bahadurgarh and owned land in Tanda Heri village in Jhajjar district.

Vamika, who is married to a Delhi businessman, could not refuse the idea of turning a flower-farmer. They decided to tie-up and start-up. This is how Unistar Agro came into existence.

Though, the two young women were apparent that traditional farming was not for them. In place of it, they wanted to run Unistar Agro like a professional business venture and market their product in India and abroad for earning a handsome profit.